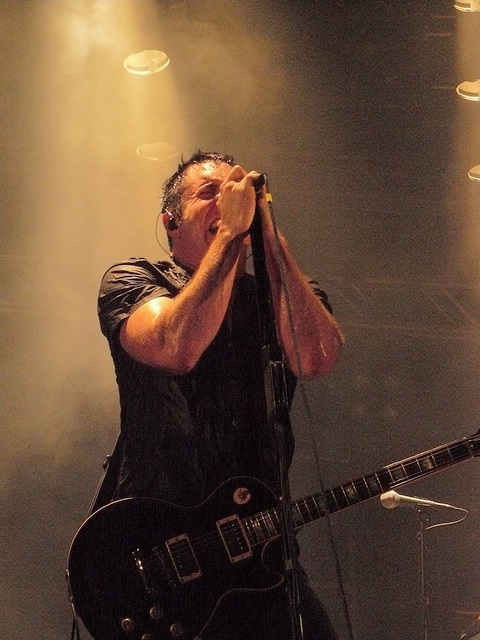 Nine Inch Nails are one the biggest names in the underground rock music scene. They are the sort of band that don`t get much airplay on mainstream radio but can sell out and headline huge shows all around the world. Fronted by the legendary Trent Reznor, the band encompass a huge variety of sounds from blistering hard rock, to pumping electronica, chilled out ethereal ambience and back.

Difficult to pigeon hole and harder not to like, Reznor and co over the years have created a legacy that is awe inspiring and live they don`t disappoint.  What an awesome gig. Watching Nine Inch Nails is always an incredible experience. Luckily for me, this was the 5th time I have managed to see the band, and it was the best. This gig even tops the legendary Reading Festival `07 gig where they pretty much blew everyone else off the stage that weekend.

Some of the set highlights for me personally were `The Hand That Feeds`, `Gave Up` and `Survivalism` although the whole show was inspiring. If you have never been to a NIN show, you really are missing out on a  treat for the eyes as well as the ears. What the band lack in crowd interaction, they more than make up for with an almost cinematic experience.

With the much acclaimed `stealth screen` in action , we are treated to a canvas of visuals in and around the band which, while enhancing the mood add to the show and bringing it up to breathtaking levels. We were treated to dystopian style graphics on the more electronic tracks, swarms of red and black to encompass the mood of anything remotely heavy and plenty of other delights that the written word doesn’t do justice to.

As for the songs, the set was probably about 80% the perfect choice of songs, but with a huge back catalogue of material and over 25 years of tunes to pick from, it was always going to be an incredibly difficult choice for the band to whittle that down to just 20 songs. 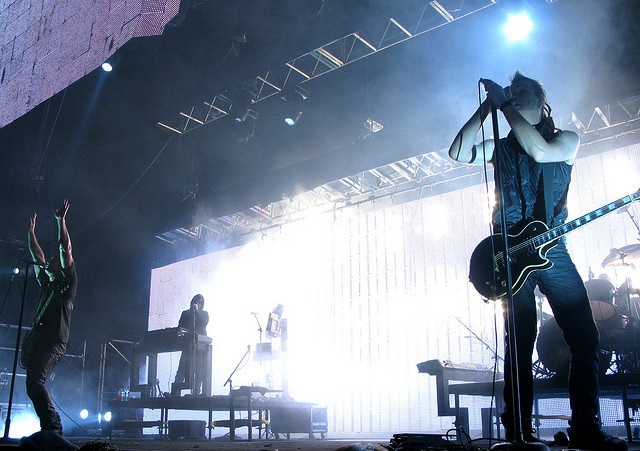 This current touring setup consist of four members of the band, Trent Reznor, Robin Finck, Alessandro Cortini and Ilan Rubin. All four at various points play guitar as well as swap and play other instruments. The guitar work was absolutely flawless though as you would expect, with huge razor sharp tones on offer during big rockers such as `Wish ` and `March Of The Pigs`. Some of the tones these guys create blow most rock band out of the water, and NIN certainly don`t place a huge emphasis on guitar as most of their contemporaries do (at least not in the obvious sense).

Some of the highlights include big songs such as `Wish`, `The Hand That Feeds`, `March Of The Pigs` and of course `Hurt`. There were plenty more though, `Gave Up`, `Eraser` and `The Great Destroyer` all added a huge amount of variety to what was already a hugely diverse and intensely powerful set.

NIN have always been a band with a massive variety of tunes, from the full on intense punk rock power that is `Wish` to the electronic grooves of `The Warning`, the show packed a huge amount of power for everyone who witnessed it.

Next Post: The Line 6 AMPLIFi FX100 specs and review